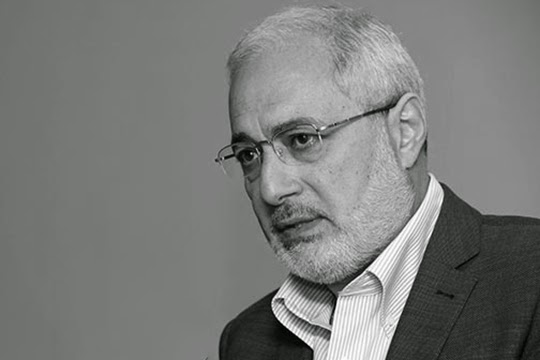 Longtime politician, ARF member Vahan Hovhannisyan passed away today at the age of 58 after a prolonged battle with cancer. He was serving as Armenia's Ambassador to Germany, he was a member of the ARF Bureau, a one-time political prisoner, a former presidential candidate, a historian and archaeologist, a husband, father and grandfather and he was my friend.

I can't remember the first time I met Vahan. He simply appeared in our lives as if he was always meant to be there or perhaps we were meant to know him, I don't know. But he was there, a permanent fixture in our lives and in the political life of Armenia. His, was a life of juggling multiple roles, of contradictions, sometimes of controversy, other times of illumination...and while he most certainly had his detractors, by never betraying his principles, he remained true to himself.

His razor sharp tongue, his intellect, his deep knowledge of Armenian history, his sense of duty and his political acumen were unrivaled. An incessant reader and scholar, Vahan's knowledge from the abstract to specific historic and contemporary events was astounding. His wit laced with cynicism, his specific brand of humor, his ability to see beyond the horizon, and his willingness to listen and give advice and also take advice when he felt he needed it, made him a unique Armenian politician, I would even venture to say incomparable.

I do not claim to know Vahan the way those closest to him knew him. I just simply had the privilege of being his comrade, of sharing the same political heritage and beliefs, of hearing his fiery speeches during any one of our endless meetings or from the podium of the country's National Assembly. I've sat with him during meetings with Europeans, with Americans, I got to be on the campaign trail with him, I was witness to moments of uncontrollable laughter to the depths of his despair.

What I will miss is seeing his face as he walked into my office when I was the director of the Hrayr Maroukhian Foundation, and depending on his mood, call me not by my name, but whatever suited his fancy - one day it would be 'good morning Baydzar,' the next day he would call me Maryushka, another day Manyak, sometimes he would simply say 'barev aghbers.'

I will miss him and there is no doubt that the world, our world will be a much duller place without him.

Posted by Maria Titizian at 9:22 PM No comments:


From the killing fields in the Ottoman Empire at the turn of the 20th Century to the pogroms in Baku and Sumgait at the end of the same century, Armenia and Armenians have been rising.

From Genocide to dispersion and marginalization to the victory in Karabakh to the establishment of the third Armenian Republic, Armenia and Armenians have been rising.

From the glorious kingdoms of Armenia to foreign invasions and occupations, to the writers who inspired a national reawakening to the young activists today in the Diaspora and the homeland who are trying to carve out a future where they see themselves as the game changers, Armenia and Armenians have been rising.

And yet we fail to see our power.
Power of our survival.
Power of reconstructing lives, family histories and communities.
Power of overcoming calamity and heartbreak.
Power of victory.

This blog is a space where I hope to liberate my thoughts and opinions from the constraints of my own personal, cultural and political baggage; baggage that also carries a hundred years of sorrow; baggage that has been drowning my personal truth.

I will write from the most mundane goings on to those events that promise to inspire in Armenia. From taxi drivers who recite Charents while taking you to work, to ceasefire violations and attacks on peaceful residents in border villages, to street musicians to constitutional changes to foreign policy....no limits, no constraints, just thoughts, impressions and feelings of a repatriate trying to figure out this country called Armenia. Armenia that is rising.

Join me on this unpredictable journey and let's see where we end up.
Posted by Maria Titizian at 11:14 PM No comments: