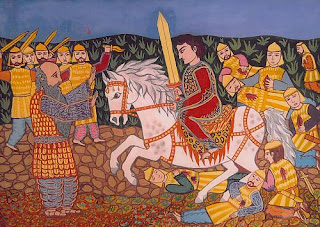 The Test of Leadership 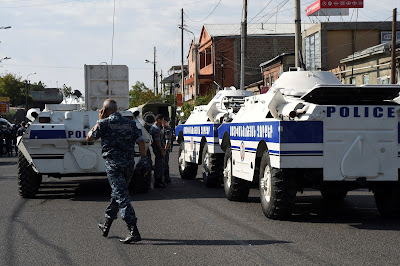 Armenia is in crisis. It has been in crisis for more than two decades. All the pillars of democracy have been compromised - from flawed elections to an absence of justice. Widespread discontent, rampant poverty, a dysfunctional economy and a broken social contract between the people and ruling authority have worn down an entire people.

I don't want to fall into the trap of condemning the actions of a group of armed men who stormed a police station in Erebuni (in the process killing a police officer and injuring three others) while trying to justify their motivation. However, it's a trap that one cannot avoid in this situation. The fact that most or all of them are Karabakh war veterans did not give them the right in "peacetime" to resort to armed resistance.

Once again, the word "however" is pivotal here.

For the percentage of those who live in relative privilege and comfort in the homeland, who earn a living wage, the conditions of their lives might not justify such extreme measures. For the rest of the population, whose dignity has been hijacked and who have lost hope, such extreme measures have garnered a quotient of sympathy.

Putting aside all the probable arguments for or against the actions of the group calling themselves the Daredevils of Sassoon, we have an explosive situation on our hands. The outcome is going to be tragic. It is not far-fetched to assume that security forces will at one point storm the building to rescue the hostages and apprehend the armed men. This is not Electric Yerevan where the leadership of the country played a waiting game and their gamble paid off. This cannot go on indefinitely. Something will have to give.

What are the likely scenarios and ensuing results?

The armed men will surrender peacefully and spend the rest (or most) of their lives in jail. For now, this scenario seems unlikely. Security forces will initiate an operation to storm the building and either all or some of the hostages will be rescued or killed. Either all or some of the armed men during that operation will be killed. If they survive, they will be tried and sentenced according to the law. So they will either die or spend the rest of their lives behind bars. I don't care which side of the debate you are on, all possible scenarios are going to be tragic.

This is a critical juncture for Armenia's leadership. It is a juncture which can test the ability and acumen of the best of leaders (of which we have none or very few). The full responsibility of this current atmosphere of injustice, impunity, political and economic monopolies, in the concentration of real power (police, military, internal forces, etc.), lies with the leadership. Therefore the onus is on them to initiate a real, genuine discourse in the country. Accounts need to be settled.

If President Serzh Sargsyan and his ruling Republican Party want to survive (in a political sense) then they have no other choice other than to start TALKING to the people. Talking to the people does not mean indiscriminately apprehending people who want to have a real discussion about the issues that effect each and every one of us.

We need to come out from our homes, from behind our keyboards and our perceived existence of well being and begin a real dialogue. The leadership must not only allow it, they are obligated to be part of that process, otherwise conditions will escalate out of control and it is in no one's interest for that to happen.

One final thought...mostly everyone has been referring to the armed men as տղաները or 'the boys.' There is a sense that these men are a part of us, of our identity and narrative. And that is why this is all the more tragic.